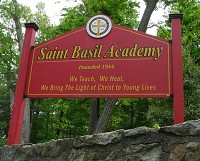 Due to Covid, this year we have a new system for giving gifts to the students at St Basil's. We have been asked to supply one $25 Amazon gift card for each child. There are 29 students this year. Please use Sign Up Genius to sign up to donate a card. The sign-up is located here. Then either give your card (in an envelope with your name on it) directly to Fr. Eric when you're at church, or mail it to Mary Jane Klokiw. If you order the card on Amazon, you can have it mailed directly to her if you wish. Please let Barbara Durniak (badurniak@gmail.com or 845-325-8122) know once you've given your card to Fr. Eric or put it in the mail for Mary Jane.

To give the St. Basil staff enough time to pick up the gift cards from St. Gregory's, purchase, receive and wrap the gifts by 12/10 (the date of their Christmas celebration) Mary Jane would like to have all the gift cards in hand by Monday, 11/30, so the last day to get gift cards to her or Fr. Eric will be SUNDAY NOV. 29th.

Please contact Mary Jane or Barbara with any questions. Jacob's Well is the offical publication of the Diocese of New York and New Jersey of the Orthodox Church in America. In this issue see the interview with our own Reader Theogenes. To see the publication go here.

The news from the West has been practically apocalyptic of late with wildfires throughout the West, especially in California, Southern Oregon and Washington State. I am presently aware that several families have lost everything to these fires and others are threatened. Not only that, whole towns have gone up in flames affecting the lives of many with loss of homes and jobs. Yesterday the skies in San Francisco were dark orange – so dark that the streetlamps were still lit at noon. Thankfully, while threatened, no churches have been lost.

“Seven families are in the Red Zone (leave now) and have evacuated. At least two of the homes are likely to burn. The others are in the path of one of the fires.

Most of us are either in the Yellow (get ready now) or Green (be prepared to leave) Zones. This includes the whole area around the church property. The winds have abated but the fires are very active and close. From my office window I cannot see beyond about 100 feet due to smoke. It is eerie and worrisome for everyone.”

Fr. Andreas Blom, who lives in Talent, OR was evacuated with his family yesterday. There was really concern his home and church were lost to the flames. He was able to return home today to pick up a few things and found everything across the street from his house was totally lost to the fire. His home and the church have survived so far. At this writing, three families from his mission were burnt out though.

First of all, we ask for your prayers for everyone, Orthodox and non-Orthodox who have experienced loss. Secondly, should you wish to help, donations can be sent to:

Donations will be used to help not only our own parishioners, but also our neighbors in this time of crisis.

We thank you in advance.

+Benjamin
Archbishop of San Francisco and the West

Many have seen the horrific explosion that happened in Beirut this last week. The damage is extensive with a loss of life and property including churches and homes. St. Gregory Orthodox Church is asking for people to donate to these organizations to assist the people of Lebanon.

The International Orthodox Christian Charities (IOCC) is one the leading charities world-wide and is very often the first chartable responder in such situations. Their record of charity is unapparelled throughout the world with 92% of the money raised going directly to help those in need. They are in 160 countries and provide over $179 Million in relief regardless of the people’s faith or location.  Please go to the IOCC webpage to find out how you can donate online at https://iocc.org/

Glass for Lebanon (Go Fund Me) fundraiser is to purely help the 300,000 + homes damaged in Beirut that can accommodate window installations. New windows will not bring loved ones back home for some, but would mean the world to others. This organization is run by Khodor Salam who is a friend of our parishioners, the Najjar/Chlus family.  His company, Go X is matching all donations (1:1) made to this fund. Go to https://www.gofundme.com/f/23id4j1vao to donate.

Lebanon has been in economic and social turmoil for the past 8 months as the country has descended into poverty, despair and chaos. They will be using all the funds raised to purchase 6mm Tampered Glass from SAINT-GOBAIN (https://www.saint-gobain.com) in Columbia and have it shipped to Lebanon ASAP.

Funds will be allocated to following tasks:

Here is some math behind the process: Considering the average home uses 10m of Glass:

Go X(goxapp.com) is helping with outreach/fundraising and working with a local independent NGO by the name Akkarouna (akkarouna.com) that will help with ground logistics like receiving the shipment, processing the glass and distributing it accordingly.

Thank you to all that donate.

Prayer for Blessing Fruit at Home for the Feast of Transfiguration Diocesan Directives on the Gradual Re-Opening of Churches

Typika Service to be used at home

Prayer Service on Coronavirus to be used at Home

Our Journey to Pascha

Eva Czukkermann recently completed her Girl Scout Gold Award at St. Gregory The Theologian Orthodox Church in Wappingers Falls, NY. For her project she built four movable benches out of Philippine mahogany to place around the fire pit that Nick Metz had built for his Eagle Scout Project. Prior to the benches, church members either had to stand, bring their own chairs or sit on the bricks that are part of the fire pit design. Due to the age of many church members, standing or sitting on the bricks is not possible and bringing their own chairs is not always feasible. The benches will encourage church members to use and enjoy the fire pit.

In addition to having a bench building ‘party’ at the church, Eva organized a potluck dinner to celebrate the benches and the fire pit. She is very thankful for her church community who helped and supported her throughout the entire process.

Reflection on the Hymns of Bright Week by Seminarian Zach

Sparrow's Nest (https://sparrowsnestcharity.org/) provides 2 meals/week as well as other types of support to people in the community who have been diagnosed with cancer. Because of the pandemic, they'll be conducting their school supply drive via Amazon. The link below will access an Amazon Wish List with items they'll be providing to their recipients and their children. If you click on the link below, you can add some of these items to your cart and purchase directly through Amazon. IMPORTANT:  Please select the Sparrow’s shipping address (it will come up as the first address), so that the items get shipped directly to them in order to minimize person to person contact. Just so you are aware, a lot of the items on the list are “bulk” items, meaning that they are larger packs of the items since those can be more easily purchased.

The deadline for purchasing is July 30th so that there is time to get the supplies to recipients. Here is the Amazon link for the items: https://a.co/3dkMOsa